Avalanche Studios, creators of the Just Cause series, could never be said leaving gamers wanting for explosive action, but they’ve delivered a new game with themes set back in the past glory of action shooters with Renegade Opps., an isometric, dual-stick shooter that harkens back to the old days of classic arcade games like Metal Slug, Ikari Warriors, or E.A.’s Strike series, with a small group of individuals taking on impossible odds. Do these renegades fight a good fight, or be sent back to basic training?

An agent of terror known only as Inferno has destroyed Catalonia, and is threatening to set other cities alight. The U.N. decide to open up negotiations, but decorated veteran General Byrant, is having none of it, throwing away his medals and walking out to set up an elite team to take down the maniacal menace. As one of the four chosen specialists of Renegade, it is your duty to take down the forces of evil with your heavy duty machine and free the world from the tyranny of fear.

It’s all very reminiscent of Eighties action cartoons, films and yes even videogames, and the game relies in its silliness, the story is presented as a series of graphic novels, with comic panels that push the narrative along. Think something along the lines of The A-Team, or Saturday morning animation fare like M.A.S.K.or The Centurions.

The four different characters, Armand, Diz, Rozy and Gunar – who never appear past the character selection screen – control mostly the same for the majority of actions, though each comes with a unique ability to call on during battle. Armand comes with a retractable impenetrable shield that can be upgraded to deflect attacks back to their senders; Diz can generate an EMP blast to knock out enemies, leaving them unable to attack; Roxy can call upon an air strike for massive damage whilst Gunar can turn his jeep into a heavy turret at the expense of movement.

This is a dual-stick shooter, meaning that you’ll be using the left analogue stick for movement while the right stick is used to fire in any direction independently of the vehicle. Driving your vehicle is technically straightforward, however your ride doesn’t turn on a dime, especially at high speed, instead you’ll have to take inertia into account, or else you’re going to find yourself flying off the first cliff face you come across. It may take a little time to get use to the handling, but it soon becomes second nature.

The left trigger activates your character’s special power, whilst the right fires whatever secondary weapon you have equipped, like the powerful rail-gun, or a deadly flamethrower. Meanwhile the A button acts a booster, giving you a short – upgradeable – increase in speed, B is used to replace your secondary weapon with a difference one, providing you can access a crate with an alterative weapon whilst Y Brings up the overlay map. Strangely, the bumper buttons go unused, though it not an issue in-game, they could’ve had controls mapped to them.

The game sets you with Primary and Secondary objectives, with respective red and gray markers showing the way to the nearest of each. Secondary objective are optional, and range from rescuing prisoners and bringing them to a barricaded church, to recovering artifacts from ancient temples. Primary missions, however, are on a timer, and taking too long to get to any will initiate a three minute countdown in which to carry them out. At points in the game a timer will countdown immediately, forcing you to rush through the enemy lines. While this keeps the action flowing it does limit the fun of simply blowing stuff up.

And blowing stuff up is the order of the day, with destruction granting you points and experience as you rake up foes, a bonus multiplier based on how much damage you’re causing inciting you to keep the pressure on the enemies. Picking up ammo or health crates while the respective stat is full will give you bonus points, giving you a choice between leaving them until you need them and collected them straight away for score.

In addition, Special points are also earned for doing well, and these can go to purchasing upgrades for your vehicle, from extra health and more secondary ammo, to upgrades to the each characters special ability. Any upgrades you buy are permanently accessible to that machine (and all four level separately), and while you’re only allocated two slots at the start of the game, you’ll soon gain enough levels to be granted four. You can also bring your upgraded ride to cleared missions in order to obtain a higher score, or even just to grind for XP and points to buy that power that might just give you the edge if the later missions are giving too stiff a resistance.

And make no mistake, the enemy units in Renegade Opps. are relentless, and you’ll receive a constant barrage of fire from them, which can make short work of you on anything but the easiest setting if you underestimate them. They tend to be more of a threat in large number than in actual combat skills, generally overwhelming you to attrition. That said larger foes, such as tanks and S.A.M.s (Surface to Air Missile launchers) can pack quite a punch and take a fair bit of punishment in turn.

Adding to the difficulty are the complete lack of checkpoints, lose all your lives and its right back to the start with you, it follows along with the old-school attitude, yet some levels can take nearly half-an-hour to finish. It can be very frustrating to go through the level without a hitch and lose to an overpowered enemy boss, or just failing to pick up that one last health pack. Thankfully, the game allows you to keep any XP you’ve collected regardless of whether you came out on top or not, relieving at some of the sting of death. 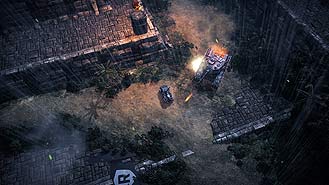 The single-player game’s nine missions will clock in at about five to six hours on the initial run through, with a local and online multiplayer, and score attack options offering the incentives to return.

Renegade Opps runs on the same engine that powered Just Cause 2, and it does a pretty good job of rendering the expansive maps, from the greenery of rainforests to the dusty desert. Houses, huts and military shanty towns collapse and explode with gusto, as do the enemy types, of which the game could probably use a few additional models. Nonetheless, the game runs at a perfect clip regardless of the amount of action that occurs onscreen; explosions and all.

The voice work is nothing really special, and would be laughable in a more serious game, however it works perfectly in the context of the game, following the over-the-top daftness of the theme Led by General Byrant’s gruff delivery and the maniacal ramblings of Inferno. The music is serviceable action fare, though hard to notice over the sound of gunfire and, of course, the explosions.

Renegade Opps. is a modern day blast from the past that shows that there’s still a place for that 1980s style arcade fun. And while the difficulty may be a tough cookie, its fast kinetic pacing and the sheer exhilaration of turning the tanks of evil into metal slag means that this is one game that shouldn’t have any problems finding it place on your console/PC.

Originally published on gamingtilldisconnected in 2011.

Somewhere In The Midst Of Nowhere

Enjoying the anime fandom one day at a time!

Retro game reviews from the UKNESBoy

PORTRAITS OF A GHOST

Home of News, Reviews, Forgotten/Minor Characters Project, Who Wants to Be a Millionaire-Animation Edition games, and much more!!!

A review blog of all the Disney Animated Classics: From 1937 to the present day - Co-written by a pair of nostalgic twenty-somethings!