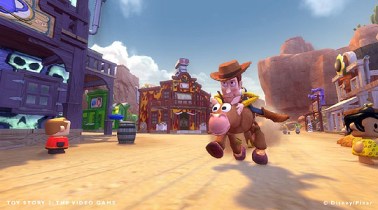 It is hard to believe that it has been fifteen years since the first Toy Story was shown in cinemas across the world. Another aspect of fifteen years ago is the fact that license games hadn’t completely become a dirty word, particularly with Disney games of classic films for the Super Nintendo and Sega Mega Drive, which were generally regarded quite highly. In this list of games were the adaptations for the original Toy Story and Toy Story 2, which were pretty good titles for their respective systems,* can number 3 continue the tradition of its forebears?

For those who hate spoilers, the game version of Toy Story 3 doesn’t really give much away, as it sets up scenarios in a style that suggest what goes through a toy’s mind when they being played with, or is it what the imagination of the child playing envisions? Either way, the game is keen on not spoiling the film it is based on by not providing an exact context of how the events play out in the film.

The game is split up into two parts, an action game and the toybox. The action game plays through several scenarios like infiltrating Zurg’s headquarter as Buzz, or stopping a runaway train with Woody while contending with the nefarious Dr. Porkchop. Many levels have you swapping between, and using the different skill sets of Woody, Buzz or Jessie to solve the various puzzles; a few sections require solving a string of basic logic puzzles that use all three characters, requiring them to all be in the right place, pressing switches that will help the others proceed. This part of the game takes a mere couple of hours to complete, with only the incentive of picking up all the in-level items to bring you back (or perhaps boosting achievement/trophies)

However, the main meat of the game is the Toy Box mode, essentially a sandbox game played in the world of Woody’s Roundup. Playing as Woody, Buzz or Jessie (all three are referred to simply as Sheriff by the townsfolk regardless), you job is to help build and protect the new settlement on behalf of the mayor Hamm; you achieve this by completing simple tasks and buying new toys to populate it with. As you get further into the game more characters, costumes and objects will become available for your enjoyment and manipulation. 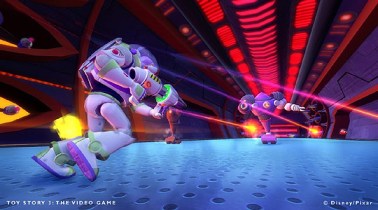 The quests are generally fairly straightforward, such as one early one where the mayor asks you to force a couple of citizens into wearing I love the mayor T-shirt, to giving the buildings a new lick of colour. Others get a tad trickier, like asking you to rescue the mayor from the bandits’ hideout, but nothing that should tax anyone for too long. There is very little penalty for being hit and only the minor inconvenience of going back to the last checkpoint for dying. Essentially you could think of Toy Story 3 as Red Dead Redemption meets the quest giving nature of something like World of Warcraft; for the younger set.

My main criticism is the lack of any sort of map to give you an idea of where you are. You have a compass which gives you a direction to follow, but it becomes a tad pointless when you’re standing near a cliff and it’s pointing almost straight up with you having no idea of how to traverse the thing. Luckily several wells lead to a network of tunnels which you can get back to the hub, or any other well you’ve already been down. It doesn’t help you find you way round, but at least it helps stop you getting completely lost.

Woody and co. can ride and race Bullseye – and later a cutesy dragon – along predefined courses, race toy cars across obstacle laden tracks or just redecorate the town, capture bandits or just go and cause mayhem against your indestructible colleges with impunity, or with some size changing goo. While there is a small degree of grinding for gold, the precious metal and gold giving missions are never in short supply and so it’s never too much of a hassle. You could potentially get hours of entertainment out of the toy box mode, it really depends entirely on the player and what they put into the game; gamers that absolutely must have rigid structure are warned.

As you go through the game, you find yourself in several whole areas that act as levels in the own right, tasking you with a simple retrieval task that gets a little more complicated, when you reach said item. While the setup is the same, it’s hard not to smile when you’re zapping toy ghosts with lightning while the theme music from the Haunted Mansion ride plays in the background. Once you finish these sections, décor and enemies from the area will begin to occupy and terrorise your town, giving you more potential distractions to engage in. 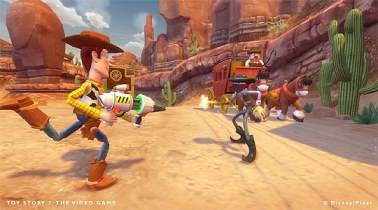 The game looks very good, with the character models strong approximations of their feature film counterparts, animation is also of excellent quality; all the toys have personality, in particular the main cast, and the whole production is of a high standard in terms of its presentation. All the surviving actors make their return to their respective voices, with sound-alikes standing in for those who have since passed on. There is a lot of spoken dialogue from the main ensemble, pretty much all well delivered, although the lego-like toys that make up the majority of the populace speak in gibberish a la Banjo-Kazooie, which can grate a bit every so often. In all, the game looks like something that came from a company that knows how to capture the look of some of animation’s most beloved characters.

Toy Story 3 is a good timewaster, and though it may not be the most complex or longest game on the market, it certainly avoids the pitfalls that plague the movie licensees in this day and age. Disney Interactive and the companies that they are employing are continuing to do a pretty decent job of game creation of late, with this and the DS’ Alice in Wonderland; being some of the better games based on movies I’ve played in a while. May their contributions to gaming continue.

originally published in 2010 on gamingtilldisconnected.

Somewhere In The Midst Of Nowhere

Enjoying the anime fandom one day at a time!

Retro game reviews from the UKNESBoy

Portraits of a Ghost
unshavedmouse

Home of News, Reviews, Forgotten/Minor Characters Project, Who Wants to Be a Millionaire-Animation Edition games, and much more!!!

A review blog of all the Disney Animated Classics: From 1937 to the present day - Co-written by a pair of nostalgic twenty-somethings!